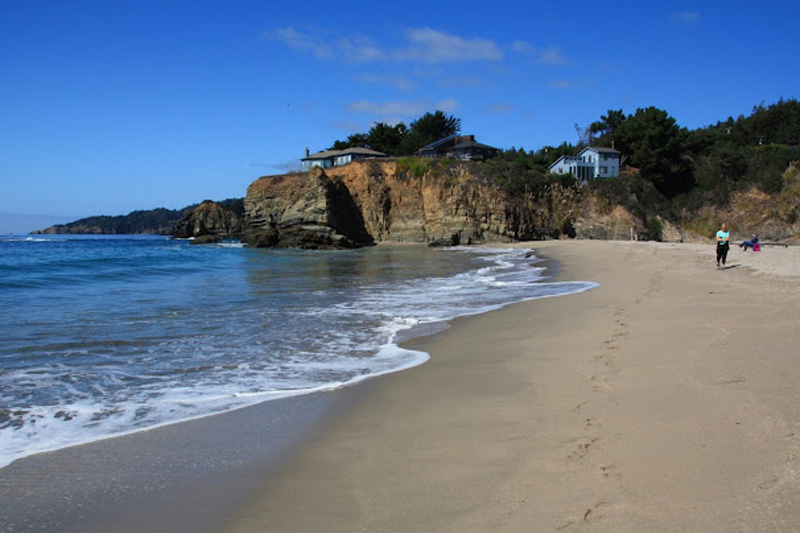 Abandon ship!! There was a time when an opportunity arose for me shower in a waterfall.

It was a pleasant passing daydream that became overwhelming when I spotted the idyllic scene at the end of a beach in a little town just south of Pt Arena, Cooks beach in Gualala provided a picture postcard scene, about a ten foot drop the water was running just fast enough and the surrounding rocks left just enough space where I could stand comfortably under the fresh water.

Kieth Whitney was a tough, mid-western farm boy, who was built like one of those tractors he used to drive who was also a heavy equipment operator and a fabricator and mechanic. Not very articulate, but with a soft heart, and not a little gullible. He also could be very stubborn in his aw schucks kinda way. He also was a hoarder and collector. Where the collector ended and the hoarder began is any one’s guess, but if you need something for you boat or truck, he was my go to guy. I would not go so far to say we were partners, but he did work for me years later when I was converting my boat the Longfin into a sea urchin dive boat. He migrated into the Sea Urchin business when John Gill recruited him to help him restore the Kimmie Sue named after Johns girl friend at the time. He basically was the Tender/ Mechanic/ operator for John. Anyone else Tender and fix it man..It just so happen one day Luke Brost asked Kieth to operate his boat while he was on vacation. The “Office” was a 24 ft Radon well seasoned and I had worked on her before. We set out of Pt Arena , Me Kieth and Lukes regular dive Bruno. Bruno was a character,he was the antithesis of your typical urchin diver. Where most divers had fairly sufficient egos to make competition interesting Bruno was non-chalant and admitted he was not that great of a diver and he really could not stand the daily grind, and the hard work it entailed. He said it was the best way he knew how to make some decent money. Truth be told he was a fairly decent diver. In fact once you get to a certain point, it is mostly psychology that separates divers. His low key nature was a relief from all the machismo, present among the fleet.

It was blowing about 25-30 knots as we rounded the point headed south, but you could hide from the weather in the numerous little bays and coves, that were typical along that part of the coast. Only trouble with that is, that’s what everyone else did so the urchins were becoming scarce in those areas. Kieth was gloating as the skipper, but I still had control of our destination because I was the diver, and of course Bruno was just along for the ride . At least that’s how I saw it. Well the compressor would not start, so we decided it would be best to tuck into Gualala bay and it was idyllic, out of the wind and the rugged cliff shore peppered with redwood trees, made way for the white sand sloping beach. Picture postcard perfect. Cant say much for the crews camaraderie though. although Bruno and I got along ok. I had the wheel as we made for the anchorage to work on the compressor. There were 2 fairly large wash rocks guarding the bay. The near shore rock was navigable on the shore side, as I seen many boats take that route tide permitting, and that was the shortest route so I headed that direction when Kieth’s ego, got the better of him , or me or both and he insisted that we avoid the shore and go around the Outer wash-rock. The bottom meter was not reading anything that might show a sudden rise in the bottom, but Kieth pulled rank as he was technically the operator, and the Bruno remained diplomatically neutral, as it seemed he was enjoying the show. Kieth and I were performing with our overblown egos and stubbornness. I took one look at that waterfall, then another, and decided that I would never get this opportunity again. So I stuffed all my clothes in a plastic bag, tied it to a floater and abandon ship. I made a b-line for the beach, and when I looked back Kieth was in a state of shock, Bruno, could barely hide the grin that was forming on his face. Kieth’s share of my potential catch was forfeit, to the waterfall gods, as I made it to shore and 15 minutes, stripped my wetsuit off. Buck naked with not a sole around to protest, though I doubt it would of done any good. I relished the crystal clean cool waterfall. I allowed the freshwater into all of my orifices with delight, and as my epiphany, subsided I got dressed and hiked up to the general store for a 6 pack. 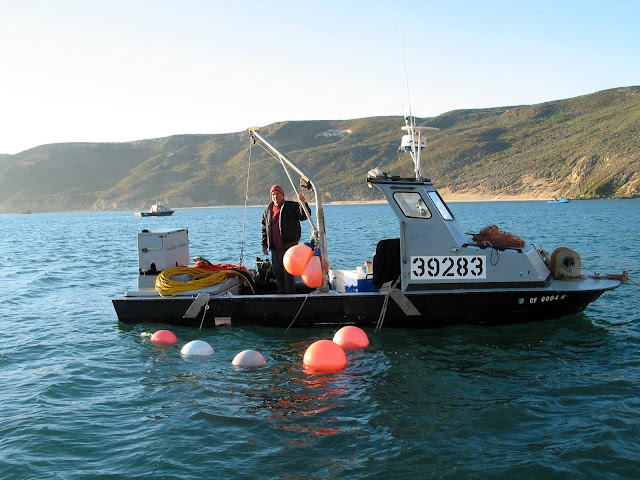 After I polished off the 6 pack I packed up my gear as only an urchin diver could and parked on highway 1, hitched out my thumb and hoped a car would stop. Well lo and behold who should come chugging around the bend grinding his gears as he negotiated the sharp curves and inclines highway 1 provided, but our very own truck driver on his way to pick up our urchins. He recognized me immediately, pulled off and as I threw my gear in the back, I could hardly wait to tell the tale of the waterfall and the wayward diver. The convenient ride home by the truck driver made a perfect ending to the story. I did not make any money that day, but I experience something no money could buy. Utter satisfaction that I turned the tables on Keith and the best shower I have ever had.