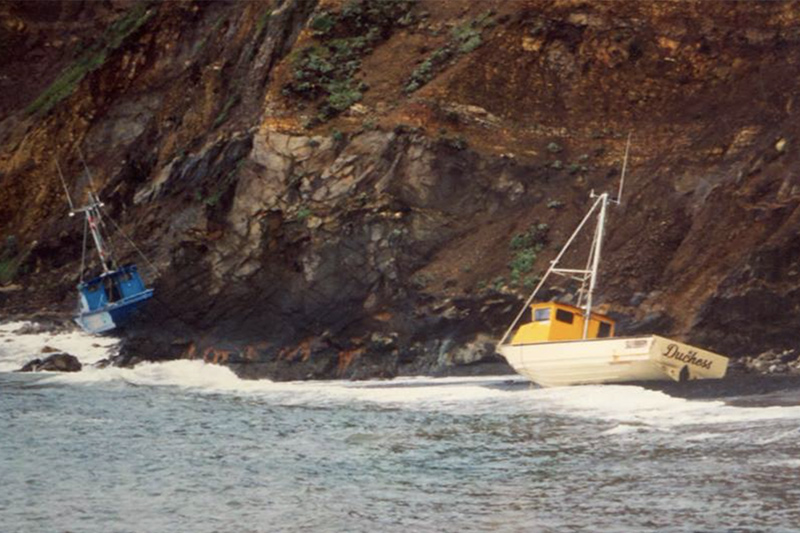 When I arrived in Point Arena there was this young man who was working the Noyo Queen an old beat up Radon. He did not dive but he tended for the divers and did ok I guess. He was enthusiastic and had ambition.

He was about 22 years old, and he had the wherewithal to seize upon a window of opportunity, that took some charm, not a little skill, a heap of some big balls, courage, tenacity and any other adjective one would want to throw in that would fit for mission he set out upon that summer.

The year was 1990 and I had migrated up to Pt. Arena originally the year before in my 1960 International 3/4 ton dually Pick up truck. The long stroke straight 6 that powered that beast, was equipped with a 2 speed transfer case with 4 forward gears and 4 wheel drive. Her top speed was 45 miles per hour with or without a load, and she could pull quite a load.

I bought that truck after seeing it for sale on the side of the road in Bodega Bay for 900 bucks. The Fisherman I bought it from use to use it to haul sea urchins from the beach in Timber cove, after he had lowered them onto a car hood from his little aluminum skiff, then winched them up to the truck over the sand. He then reattached the winch to the net bags, and lifted the nets on to truck which was equipped with an A frame, and a boom crane. After he drove off the sand he pumped the air back in the tires and drove to the processor located at Lucas Wharf Bodega Bay, about 25 miles away. Quite a feat of ingenuity, although it rusted the bed with all that salt water, which I dealt with later on when I painted it, but thats another story.

I had an 1955 Alaskan camper in the bed, of my famous (among the local fisherman any way) international pick up truck’ you know the kind that you can pump up and down with the built in Hydraulic pump. I rolled into Pt Arena that year in April, a little early for the season, but I wanted to get a head start. Well Posiden or King Neptune whichever you prefer decided to beach 3 Radon dive boats up on the rocks, after the huge storm swells ripped them from there moorings. One of them had twin 454 Chevy marine mercruisers with outdrives, and was brand new. All 32 feet of her, and she looked pristine except that the bottom was gashed open from the jagged rocks on the beach in Pt Arena. Several attempts were made to salvage her off the rocks, until the owner decided it was a total loss and decided just to collect on the insurance.

Well the aforementioned young man had the idea, after he had secured salvage rights, when everyone else gave up, to wait for the tide and re float her as the fish holes that were punctured were meant to hold water anyway. I don’t know exactly how he did it, but I know he had several pumps on hand and the motors were good although the out drives were beat up but operable. I think I remember he paid $5000 for a $80,000 dollar boat, patched up the fisholds put a new windshield in and rechristened her the UNDERDOG and was out pimpin for divers, when I ran into him and decided I liked his chutzpahs and agreed to give it a go.

I had been watching him for weeks patching up that hull as he had a spot near mine at the KOA campground in Manchester about 5 mile north of Pt Arena. He had his own boat as well, but it was not would I would call the pride of the fleet, but he made it work, after all a sea urchin fishing voyage in pt Arena was not all that far to go. He did not dive himself yet but I think he was going threw the motions to get his permit since they had recently closed the fishery. The California Fish and Game in there infinite wisdom felt the need to sell 900 permits, and then claim divers were overfishing the population. So they closed the selling of permits until they figured out a plan to manage the fishery. At any rate if he could work 3 good divers he could still make money with the percentage he would receive from all 3.

So I was unhappy where I was at, which was not uncommon and I rather enjoyed the experience of other operations. Off we went toward Shelter cove which was about 50 miles north, but it had not really been touched by the divers yet and there were some virgin beds calling to us. Well after we took the second on-coming 4 ft wind waves the windshield he installed himself collapsed down on us and I about shit my pants. No way was I going to suffer 50 miles in this sea without a windshield and I don’t think the electronics would fare too well either. We turned around and I was a little disappointed because I was looking forward to the new territory to be conquered.

The young skipper however did not give up, he managed to convince the owner of a big heavy duty truck, that his truck would be ideal to tow his 32 foot Radon up to Shelter Cove. I don’t know how he did it, but his powers of persuasion were firing on all cylinders that day.

Now the road to Shelter Cove makes the high mountain Inca roads look reasonable. It is a winding steep switchback of a road barely enough room for 2 cars and no shoulder. So I made the decision to hang back until that boat was safely delivered to Shelter Cove, at which time I would hitch a ride back up after he returned the tow truck. The plan was to use The Underdog as a pick up boat as it could hold over 10,000 pounds. The other mostly smaller fleet could make the trip, onto the Underdog, then he could run them in every night, and now that the windshield was properly installed run back and the other small boats could stay in Shelter Cove without having to spend the fuel and time going back home every night. Now I had the option of staying in the campground, which would be kind of fun. ( I thought)

Well the boat was delivered to Shelter Cove alright after he half skidded backwards down a windy turn and almost went over the side on several occasions, but he was a man of his word so the next morning I headed up with him in his truck.

Shelter Cove is a beautiful place, pristine Northern California seascapes with Redwood trees all around. Campground and bait shop and not much else. They did have a boat crane on wheels, that was equipped with a couple slings. Once the boat was off the trailer they would literally drive the boat down this long cement ramp about 200 ft to the water.

Well looks like were in business, I thought to myself and I got suited up and swam the short distance to where the boat was anchored. We did not even have to move the boat the sea urchins were everywhere. After about 3 400 pound bags of urchins were still hanging on the side I realized something was wrong, and there was. The electric winch had broke, with no spare or parts. I had enough. I swam in and found a campsite. I could see the Underdog from my spot and I informed the skipper that when I saw him able to load those bags, I would swim back out, which I was less than confident I would see that happen. It was fairly windy outside the Cove but inside it was warm and calm so I ventured out to a little beach that had some large rocks positioned in such a way that you could use them as a blind or a little shelter for privacy, when lo and behold I ran into Cathy, I had met her in pt. Arena as she was attached to Joe one of the divers I knew, but for how long was anybodies guess. She was accompanied by a sweet young and beautiful thing who claimed another diver I knew, without their bathing suits on, well after a few pleasantries mine came off too. So I had 2 fine girls to beach naked with while I was waiting for the Underdog to be repaired. Not a bad thing under the circumstances.

Well to my amazement, and by this time disappointment, the skipper began raising those cargo nets full of sea urchin on to the Underdog and it was time for me to get back in the water….but then it was getting late afternoon, by the time I got out there, sundown would be less than an hour away. I made my way, with a short swim, mostly out of curiosity how he managed to repair that winch. Well I found out he had not. Chad had actually utilized the hydraulic anchor winch, and ran a line from it, up and threw the block on the boom, down to the end and threw the block on the end of the boom. Down to the water, where the divers could hook up the net, and wallah, back in business. That guy would not give up, ill give him that, and because of him the operation was underway for several weeks anyway.

So I ended up hooking up with some divers who wanted to share a campsite, and we had a wonderful time getting drunk and barbecuing, happy we did not have to make that 50 mile sea voyage back to pt Arena, and even worse 50 miles back against the prevailing seas, the next morning! After we crashed for the night, I was woken up by some scratching sounds. It appeared there was something trying to get into the tent. I jumped up and threw open the tent flap to find a herd, flock, school or whatever you called an army of skunks invading our campsite scrounging for our leftover chicken bones and invading our coolers. I attempted to shew them away, and made a feeble attempt at defending our food, but decided the better of it as being sprayed by a skunk is fairly unpleasant and those skunks knew it. They were not scared of us at all, they ruled this campground. Needless to say the next night I tried to hitch a ride with some of the divers that had vehicles there, but I was persona non Grata, because the girls told on me to there boyfriends, probably in the hope they could stir up some trouble. It was back to the Underdog for me. My introduction to Shelter Cove complete.