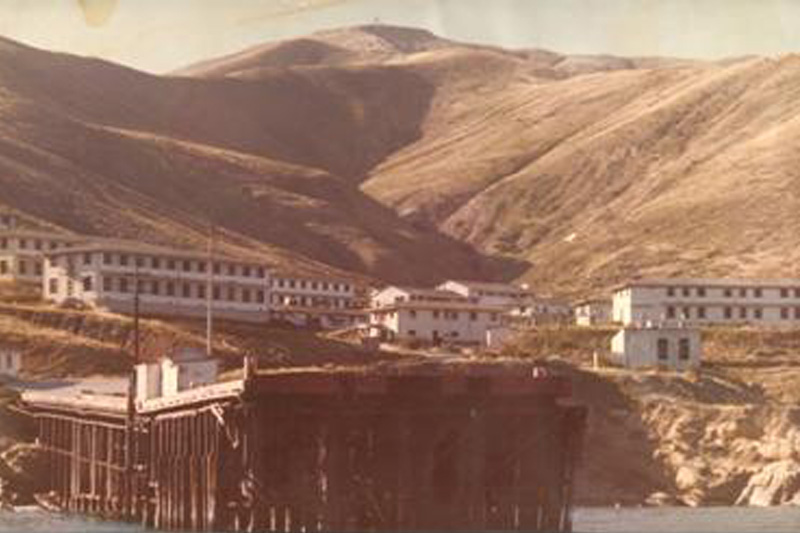 The name of the vessel escapes me at the moment, however my week long adventure aboard this unconventional 40 ft wooden bow loader, would be the first and last time I would see her. All I considered at the time, was it was work, and the way Robin Brown proposed it, come hell or high water we were going to fill that slow boat to China with sea urchins.

Robin Brown was a second generation diver whose father Duane was an old timer when I first entered the business. Very congenial and tough as nails. He was the original owner of the Spirit 1, which is a vessel with a special place in my heart because of the saga of my experience with her, which we will save for another day. I was accompanied by Kevin Sears, who I liked, mostly because he stood up for me when some patched up Biker convict, masquerading as a sea urchin diver. Walt McHale refused to allow me retrieve my dive gear from the Bottom Bandit. He sucker punched me, because I had the audacity to cook breakfast on the boat, while I was waiting for him to bring me my check, which he owed me for far longer than I was comfortable.

This 2 time loser wound up a hay maker and sucker punched me so hard my teeth rattled. He then started picking up oilcans and anything else he could throw at me as I went over the side in fear of my life. Inmate Walt Mchale never lost his prison persona, as his attempt at commercial diving was a joke. He could not handle the fact that I was not interested in sitting in the anchorage and listening to prison stories.. There is no doubt in my mind he never mad a profit. Anyway after I told Kevin what happen, he marched right up to Walt, with absolutely no fear and insisted he let me collect my gear.

Kevin was a natural water man and a known surfer who also second generation diver though his father was a chiropractor, but loved the sport. Kevin was very attractive to women when he was sober which was not much of the time, at least when I knew him. He also was involved with Treasure Salvors, a rival company of Mel Fisher who famously found the Etosha after a 20 year search. The Etosha was a Spanish Galleon full of Gold and Silver that went aground during a storm in the Caribbean. She was returning to Spain with a fleet of other galleons when the storm hit in the 1500s.

I used to love to listen to Kevins Sea sea stories, he just had a way of spinning the yarn that kept my attention, which was a good thing since we would be working together, on the old Tub.

Robin had a little 19 foot Radon that he decided to tow behind the larger slower vessel. Named the Dancer he thought he could unload his urchins on the larger vessel in the anchorage at Johnsons Lee, and just keep working. Not a problem for me, just gave us more options. The weather was terrible has we got the crap beat out of us on the way out. Once we got through the Potato Patch, so named because all the white water looked like potatoes in a field, it laid down and was like a mill pond on the back side of Santa Rosa. What a relief I thought, now all we had to deal with was the very strong currents that were present.

Once we motored our way into the Lee and set our anchor, it was break out the barbecue and crack a beer. There was plenty of pot and hash so after a good night sleep, we were rip roaring and ready to go.

The deep current spot was holding some pretty large healthy urchins, but one really had to be on your toes, as that current was unrelenting until it turned around and went the other way. The wind picked up to on the outside which did not help matters. We decided to quit a little early the first day…and we tied up to another urchin boat.. Little Wing, inside the cabin there was a poker game going on, The Lenny the skipper was a mellow friendly sort, but as abalone diver, it was beneath him to pick sea urchins, but his choices were limited, so here he was socializing with sea urchin divers from Oxnard. 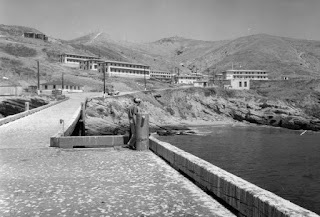 After about the third day,it was time to head home, but when Robin tried to start the beast of Burden NOTHING. after several tries it was agreed that the starter had failed. Robin directly removed the monster of a starter, and announced he would head in on the Dancer, retrieve a starter and return in two days hence. I did not mind, there was plenty of food on the boat and some smoking material that was illegal at the time, but was a great cure for boredom which we were anticipating, while we were waiting for the Dancer to return, which was much longer than the estimated time of Arrival. 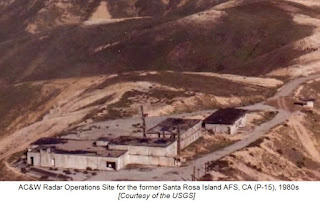 For a day and a half Kevin just laid in his bunk and read books, which I did for a while, but that ghost town of an Air Force Base located up onshore, or what was left of it was calling to me.

After several attempts of failing to convince Kevin that we should swim in and go exploring, I switched tactics as he seemed content to read his books and just relax. I started attacking his manhood and suggested that all those sea stories were just stories as he did not appear to be the person he was describing with an adventurous spirit, willing to leave his comfort zone for discovering the unknown. He finally relented and not without some disgusted looks my direction, no doubt related to the persistence and decidedly uncouth methods to light a fire under him I employed, with success lets not forget. The end justified the means.

It was nice to get in the water as it was rather too warm for me on the boat. After a short swim we wandered around the base, wondering why the military just abandon all this construction and equipment. There were animals living in some of the buildings. We guessed at some of the functions of the different buildings and it was kind of creepy, hearing the creaking doors the wind caused and the emptiness of a place where 1000s of people worked, ate, and lived.

After satisfying ourselves that we had completed exploratory of the base proper, we decided to take on the hill that rose up behind the base, and we noticed it looked like a road leading up to some buildings and towers. It looked a lot closer than it was, I realized as we began the ascent. Kevin took the lead as he seemed to be getting more enthusiastic about our little episode, all the while looking over our shoulders, as the view became better and better, for the Dancer, in the hope Robin was returning with the starter. 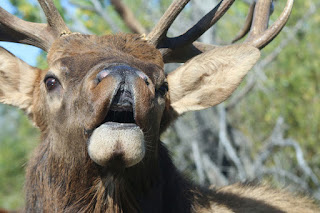 The summit of our hill proved to be interesting, mysterious, and a little frightening. There was complicated, what may have been machinery for some purpose we were not quite sure. We had heard stories about how the base served as an early warning facility, in case the cold war turned hot and Russian missiles were on their way. There were these huge concrete silos that we deduced may have housed missiles. We climbed down one, as there was a built in ladder. There was also these slots, that looked like some kind of monorail, except in reverse winding around the place, with signs warning of radiation. We decided not to linger, as we headed off down the hill and up another with similar if not as elaborate construction and equipment. We then sighted a creature that was acting very curious about our presence. It was out in the open intently following us with its eyes, and at one point it appeared it was trying to approach us. I read later that this was typical behavior for the Island Fox. Apparently the Chumash Indians that had resided on the islands in the past centuries, had treated the Fox almost like a pet, resulting in this very trusting behavior, not typical of a wild animal.

At this point Kevin totally made a 180, I thought, as he suggested we follow the creek, and just take it where it led us. I was a little apprehensive, because the prospect of navigating this wilderness area at night, did not seem wise, especially with that herd of elk upstream, that could have stampeded our heads into oblivion. However Kevin seemed fairly confident, and that rubbed off on me and down the creek we went, it was fairly easy going, which was a relief from the rugged terrain we had been hiking on, causing us to keep our eyes on our feet to avoid tripping or falling. We came upon an area about 30 feet long, not quite a cave, but an overhang that was littered with broken abalone shells and various other apparently discarded brick a brac. Kevin immediately recognized it as a Midden, which is a kind of Indian trash heap, that remained in evidence of the Indians presence, at least until Europeans arrived, when their populations were decimated by disease and war.

Archaeologists highly value these middens, as a record of the cultures diet and lifestyle, and I found that interesting, but not enough to linger as the shadows were becoming longer, and I had no idea how far the sea was, or at what location we would emerge. As it turned out, we rounded a change in direction of the creek, and wah la, the sight before me, increased my visibility 10 fold, as I looked out at the sea, and in the foreground the landmark that indicated to me exactly where we were. The stark contrast to the steep valley of the creek bed, to the rusty wreck of the freighter Chickasaw, was dramatic. It immediately reminded me of the original feature film Planet of the Apes. 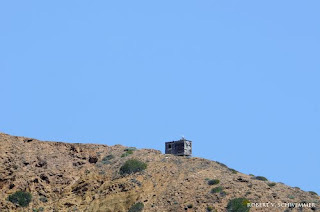 The end of the film shows Charton Heston making his way across the deserted sand beach. It appears he had been traveling a long time, and all of the sudden the arm of the Statue of Liberty appears jutting out of the sand clutching the torch, symbolizing the light giver as Heston realizes that he had been on Earth,only in the future. The whole time he thought he was on a planet in some distant galaxy where the apes were the masters of the humans.

The trip back was treacherous as we climbed the embankment and wound our way up to the north point light., and then back down to the base spotting a mule deer on the way. We swam back out to the boat and a day or so later here comes Robin on the Dancer with a big old grin on his face, and a starter in his hand. He got the starter in and back home we went with a story I will never forget.